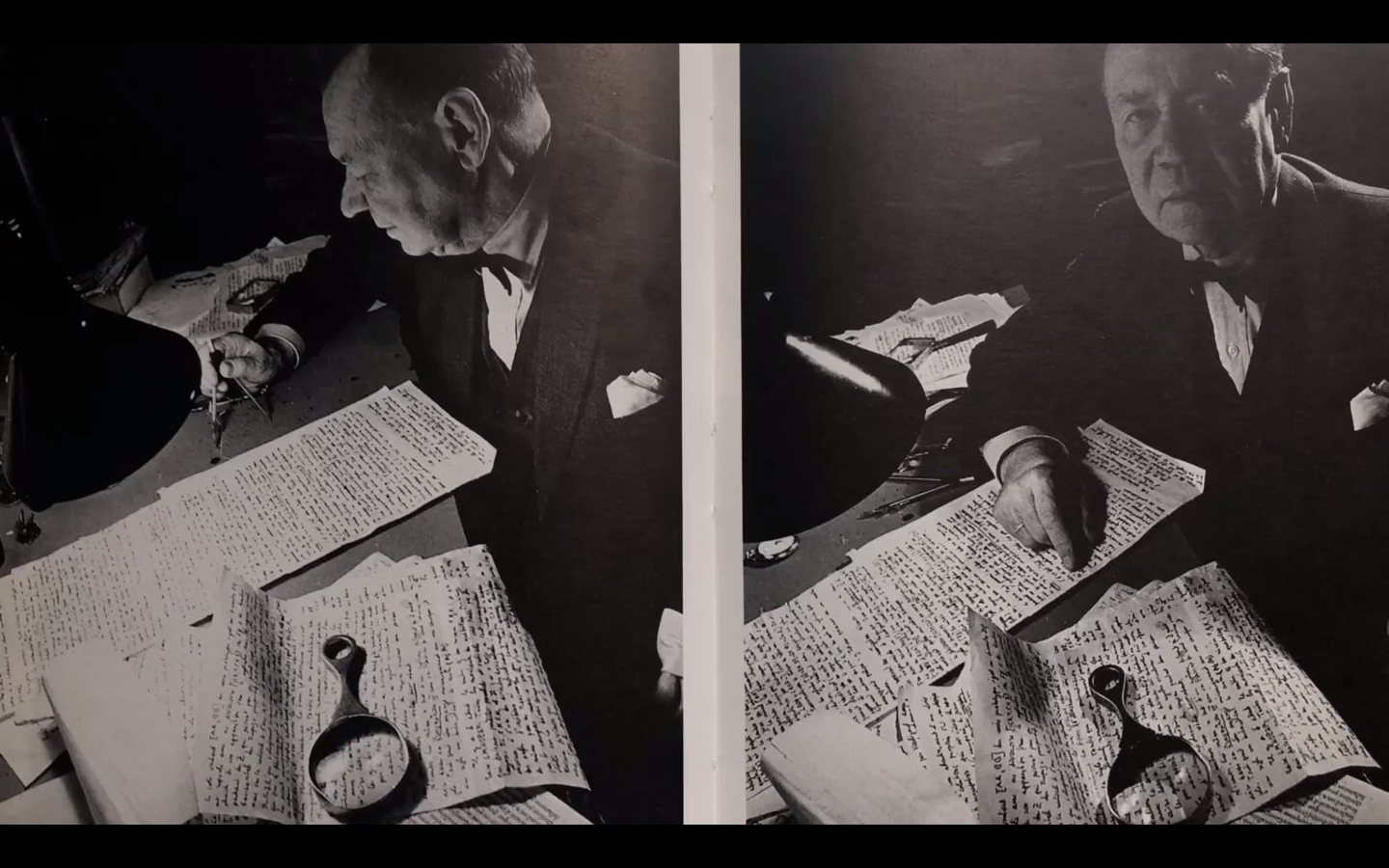 ‘It was a mysterious person. Everything he wanted to say he wrote in his books’ wrote art historian Jean-Francois Chevrier in his biography about Jurgis Baltrušaitis (1903-1988), art historian and art critic, a founder of comparative art research. The video invites to a journey with art historian Odeta Žukauskienė through the books of Jurgis Baltrušaitis and main topics of his research – Medieval decoration, imaginary forms, anamorphoses, aberrations and irregular perspectives. It was important for Baltrušaitis to find common mechanisms of fantasy or imagination that float from one culture to another by acquiring different forms. Baltrušaitis brought innovation to art research, by publishing books on art from the Caucasus, the interaction between Eastern and Western art during the Middle Ages, the imagery of fantasy, distorted perspectives, and enigmatic vision. His work received wide recognition: his books, written in French, were awarded prizes, and translated into Italian, Spanish, English, Romanian, Japanese and other languages.

Ieva Kotryna Skirmantaitė (b. 1994) is a video artist interested in alternative documentary forms in theory and in practice. By capturing and connecting real events, other people’s practices, discussions, sounds and bits from everyday life, she has found a way to create an imaginary path and to reveal invisible excitements and anxieties. She explores how different technical qualities of the digital image act as separate memory systems and represent different contemporary political and economical values.

Akvilė Kabašinskaitė (b. 1990) is a professional film researcher working in film production in parallel. She lives and works in Paris. Previously she had studied Culture Mediation in Sorbonne Paris 3 and wrote her masters on the research for documentaries. Currently she is doing an MA thesis about the construction of a documentary film.

Jurgis Baltrušaitis spent most of his life in Paris and wrote in French, though he never lectured there. Born in Moscow, a son to a Lithuanian diplomat and writer, Juozas Baltrušaitis studied in Sorbonne, lectured in Kaunas and Warburg Institute London. After WWII he delivered lectures in New York University, Yale University, Harvard University and Metropolitan Museum of Art. 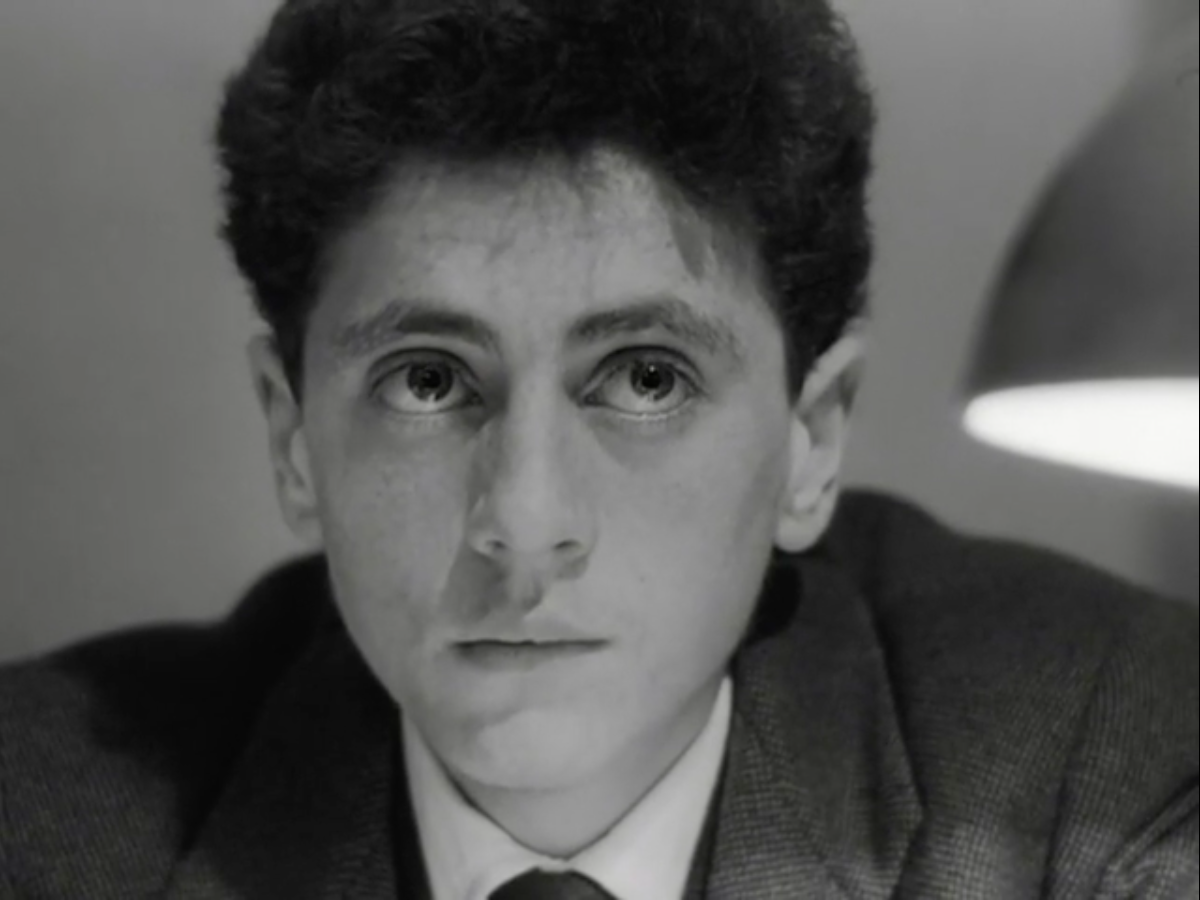 Lukas Brašiškis presents his ideas on ‘cinematic things, a research in progress. Lukas Brašiškis is a PhD candidate at New York University Department of Cinema Studies. In his academic work and courses taught Lukas examines the history and theory of representations of the non-human in film and media, explores various aspects of contemporary world cinema (with an emphasis on representation of material constituents in the post-Soviet Eastern European films of the 1990s and the 2000s.), as well as investigates intersections of philosophy, cinema and contemporary art.

Lukas has a chapter in a book Film and Philosophy (Vilnius University Press, 2013), he has contributed many essays and film reviews to film journals (Senses of Cinema and Lithuanian quarterly Kinas), as well as curated a number of film programs and events (e.g., a film program Human, Machine, Material (with Leo Goldsmith), a retrospective of films by Nathaniel Dorsky, a film symposium Welcome to Anthropocene, among others. 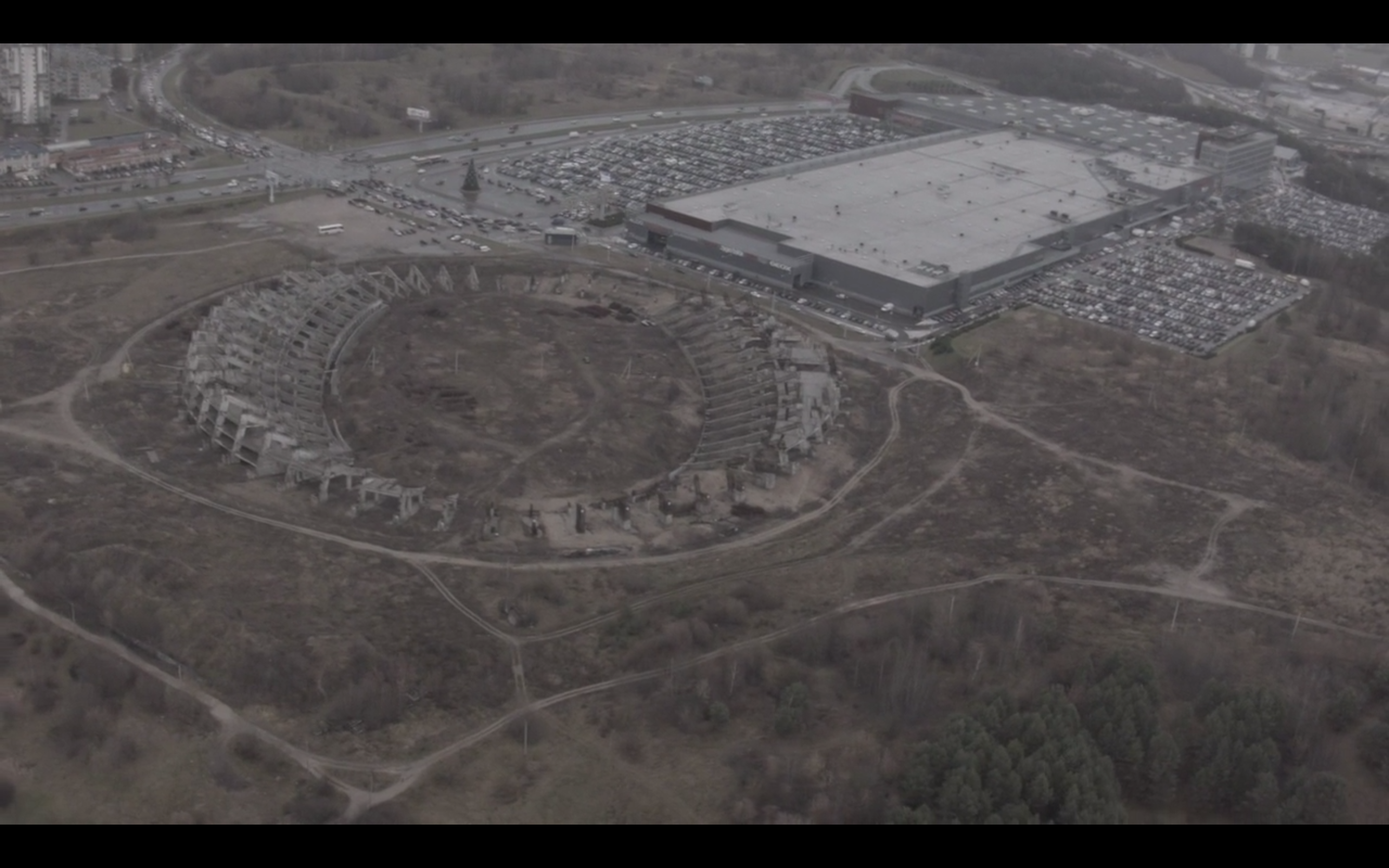 In this video, a conversation with the theorist evolves on the subject of the Nation State, while in the background we see helicopter views of the unfinished National Stadium of Vilnius. This Stadium was started building in 1987 but due to the collapse of the Soviet Union and later financial shortage, wasn’t finished up to this date. The image of the Unfinished National Stadium stands here as a testimony of the idea opened up by dr. Eglė Rindzevičiūtė – the Nation State is an outdated concept, she says in the conversation.

Eglė Rindzevičiūtė is a cultural historian and cultural sociologist, she is interested in how societies organize themselves. Dr. Eglė Rindzevičiūtė holds a PhD in Culture Studies from Linköping University, Sweden, and is a Senior Lecturer in Sociology at Kingston University London, UK.

Before coming to Kingston, Dr. Rindzevičiūtė did research and taught at the Paris Institute of Political Studies (Sciences Po), the University of Gothenburg and the University of Linköping in Sweden. In 2016-2019 she is a Visiting Research Fellow at the School of Public Administration, Gothenburg University, Sweden. Dr Rindzevičiūtė has published widely on Soviet governance, scientific expertise as well as cultural policy in such journals as Slavic Review, Cahiers du monde Russe, Current Anthropology and The International Journal of Cultural Policy. She is the author of Constructing Soviet Cultural Policy: Cybernetics and Governance in Lithuania after World War II (Linköping University Press, 2008) and The Power of Systems: How Policy Sciences Opened Up the Cold War World (Cornell University Press, 2016) and the editor of The Struggle for the Long Term in Transnational Science and Politics: Forging the Future (Routledge, 2015) (co-edited with Dr Jenny Andersson).

Live Creature after Dewey is a reading by Teets of American pragmatist philosopher John Dewey’s seminal text on aesthetics, Art as Experience, from the rooftop of a Venetian Greek dovecote located in Tinos, Greece.

Jennifer Teets is a curator, writer, and researcher based in Paris. Her research and writing combines inquiry, study of sciences, philosophy, with ficto-critique, and performs as an interrogative springboard for her curatorial practice.

She recently presented (with Margarida Mendes) The World in Which We Occur at the XII Baltic Triennial in Vilnius – an event series taking place over the telephone and formulated around questions addressed by speakers across the world. The World in Which We Occur embarks on modern day issues rooted in the history of materiality and flux as well as pertinent politically enmeshed scientific affairs shaping our world today.

In this film Jonas Mekas discusses: the intensity of experiences; his dreams; his past life as a bumblebee; the non-linear narrative of time; the first time he made love to an American woman; why his Lithuanian accent is still so strong after 65 years in America; the Lithuanian state’s refusal to recognize the State of Palestine (after Lithuania having been in a parallel situation); voyeurism; Casanova; and his relationship with the ukulele playing falsetto singer Tiny Tim. Jonas also plays unheard early recordings of Tiny Tim made in 1962 whilst acting as his musical agent. This film was made in collaboration with Jonas Mekas and by his request has been left unedited.

Jonas Mekas (b. 1922) is a Lithuanian-American filmmaker, poet, artist, curator and former music agent. He is often referred to as the “Godfather of American avant-garde Cinema”.

Mekas escaped Lithuania with his brother Adolfas in 1944 having experienced both Russian and German occupation. Whilst crossing Europe they were captured by the Nazis and imprisoned in a Labour camp for eight months. They subsequently escaped and hid in a farm near the Danish border until the War ended. After living in various displaced person camps he studied Philosophy at the university of Mainz. In 1949 Jonas and his brother emigrated to the USA where they settled in Williamsburg, Brooklyn, New York.

In Framing the Nexus Paul speaks about his fascination with the internet communities from his teenage years when he lived in a block house in Vilnius. He explains the ideas behind Sraunus and his collaboration with Max Marshall on Blog Reblog. The film acts partly as an interview and partly as a remediation of both projects.

Paul Paper (b. Vilnius, 1985) lives and works in Vilnius, London and online. He is a curator, photographer (after photography), and a PhD candidate at Middlesex University, London. His recent project Blog Reblog features two hundred images by two hundred photographers. It reflects questions surrounding authorship, curatorship, and crediting in the online culture and was showcased at the Austin Center for Photography in US. Recently he gave a talk at the Photographer’s Gallery in London.

Philosophy researcher, translator, and critic Tomas Čiučelis lives and works in Dundee, Scotland. During the time he spent living in Vilnius and London, Čiučelis translated two books into Lithuanian (Lev Manovich’s Language of New Media; and Noam Chomsky’s Hegemony or Survival) whilst giving public talks and participating in contemporary art projects. Currently he is a columnist at EchoGoneWrong.com magazine and in his spare time Čiučelis is also a jazz guitar performer.

In his research Čiučelis uses the heritage of continental thinkers such as Heidegger and Derrida as well as developments in speculative realism to reflect on the problems of ‘outsideness’, namely: outside language, outside reason, outside human experience.