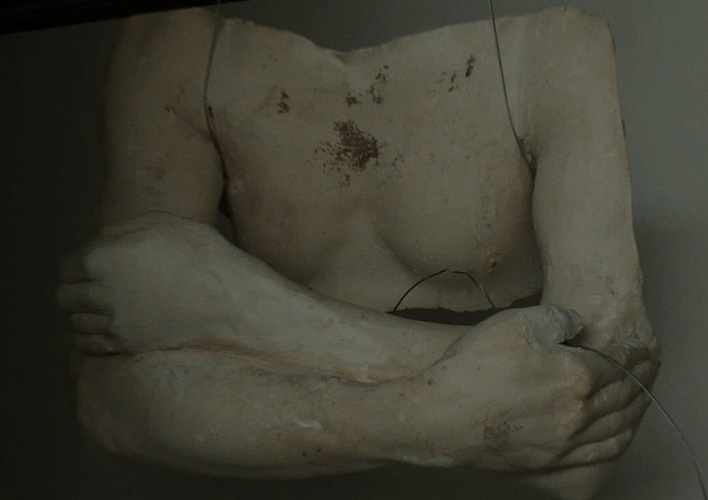 In Jonas Jr Lozoraitis is approached at his graduation show and holds a casual monologue.

Jonas Lozoraitis (b. Vilnius, Lithuania, 1987) graduated from Goldsmiths, London and lives and works in New York and Vilnius.

Live Creature after Dewey is a reading by Teets of American pragmatist philosopher John Dewey’s seminal text on aesthetics, Art as Experience, from the rooftop of a Venetian Greek dovecote located in Tinos, Greece.

Jennifer Teets is a curator, writer, and researcher based in Paris. Her research and writing combines inquiry, study of sciences, philosophy, with ficto-critique, and performs as an interrogative springboard for her curatorial practice.

She recently presented (with Margarida Mendes) The World in Which We Occur at the XII Baltic Triennial in Vilnius – an event series taking place over the telephone and formulated around questions addressed by speakers across the world. The World in Which We Occur embarks on modern day issues rooted in the history of materiality and flux as well as pertinent politically enmeshed scientific affairs shaping our world today.

A reading on the poetics of de-extinction in the economy of clicks based on writings by Valentinas Klimašauskas. Using the structure of traditional Lithuanian polyphonic songs, the video unites fragments, poems, quotes, stories about: new friendships (as a metaphor for an old internet); becoming Neanderthals; why Gertrude Stein would not pass the Turing test; the AI of language; and random companies of post-humanist assemblages. The text is read by Salomėja Marcinkevičiūte.

Born after Voyager 1 left the Earth, Klimašauskas is letters, but also a curator and writer interested in the robotics of belles-lettres and the uneven distribution of the future. His book B and/or an Exhibition Guide In Search of Its Exhibition published in 2014 by Torpedo Press, Oslo, contains written exhibitions that floated in time and space with or within a joke, one’s mind, Voyager 1, Chauvet Cave or inside the novel “2666” by Roberto Bolaño.

Valentinas lives and works between Athens and Vilnius. More of his writings may be found at his website, www.selectedletters.lt.

In On Colonising Mars Geiste tells a story about her hometown Siauliai in Northern Lithuania and an area in this town called “Pietinis”. Geiste tells how the experience of growing up in this part of town surrounded by block houses and empty industrial sites echoes in her project on Mars. She is interested in the regimes of how space is represented and owned through images.

When images are abundant and circulating widely then the agency of the imagination is taken away. Martian imagery thus comes to occupy Earth.

Sisters From Another Mister have a free-wheeling practice, which embraces humour and absurd scenarios, gender play, witty sculptural forms and musical interludes. Humanity lives in the time of the transitory, near and far, ready-to-go, detachment, juxtaposition, when the impact of the internet and digital environment leads to exploring the imperceptible line between the tangible and topical space of fantasy, situated in affairs between humans and objects. Sisters From Another Mister want to turn away from this illusionary space of illusion, turning art back to the viewer by making them aware of their body.

Milda Lembertaitė (b. Lithuania, 1987) and Amelia Prazak (b. Switzerland, 1987) founded the collective Sisters From Another Mister in 2010 while studying Performance Design at Central Saint Martins. In 2014 they graduated from Chelsea College of Art with an MA in Fine Arts. Will they retire together in 2052?

In this film Jonas Mekas discusses: the intensity of experiences; his dreams; his past life as a bumblebee; the non-linear narrative of time; the first time he made love to an American woman; why his Lithuanian accent is still so strong after 65 years in America; the Lithuanian state’s refusal to recognize the State of Palestine (after Lithuania having been in a parallel situation); voyeurism; Casanova; and his relationship with the ukulele playing falsetto singer Tiny Tim. Jonas also plays unheard early recordings of Tiny Tim made in 1962 whilst acting as his musical agent. This film was made in collaboration with Jonas Mekas and by his request has been left unedited.

Jonas Mekas (b. 1922) is a Lithuanian-American filmmaker, poet, artist, curator and former music agent. He is often referred to as the “Godfather of American avant-garde Cinema”.

Mekas escaped Lithuania with his brother Adolfas in 1944 having experienced both Russian and German occupation. Whilst crossing Europe they were captured by the Nazis and imprisoned in a Labour camp for eight months. They subsequently escaped and hid in a farm near the Danish border until the War ended. After living in various displaced person camps he studied Philosophy at the university of Mainz. In 1949 Jonas and his brother emigrated to the USA where they settled in Williamsburg, Brooklyn, New York.

In Framing the Nexus Paul speaks about his fascination with the internet communities from his teenage years when he lived in a block house in Vilnius. He explains the ideas behind Sraunus and his collaboration with Max Marshall on Blog Reblog. The film acts partly as an interview and partly as a remediation of both projects.

Paul Paper (b. Vilnius, 1985) lives and works in Vilnius, London and online. He is a curator, photographer (after photography), and a PhD candidate at Middlesex University, London. His recent project Blog Reblog features two hundred images by two hundred photographers. It reflects questions surrounding authorship, curatorship, and crediting in the online culture and was showcased at the Austin Center for Photography in US. Recently he gave a talk at the Photographer’s Gallery in London.

Philosophy researcher, translator, and critic Tomas Čiučelis lives and works in Dundee, Scotland. During the time he spent living in Vilnius and London, Čiučelis translated two books into Lithuanian (Lev Manovich’s Language of New Media; and Noam Chomsky’s Hegemony or Survival) whilst giving public talks and participating in contemporary art projects. Currently he is a columnist at EchoGoneWrong.com magazine and in his spare time Čiučelis is also a jazz guitar performer.

In his research Čiučelis uses the heritage of continental thinkers such as Heidegger and Derrida as well as developments in speculative realism to reflect on the problems of ‘outsideness’, namely: outside language, outside reason, outside human experience. 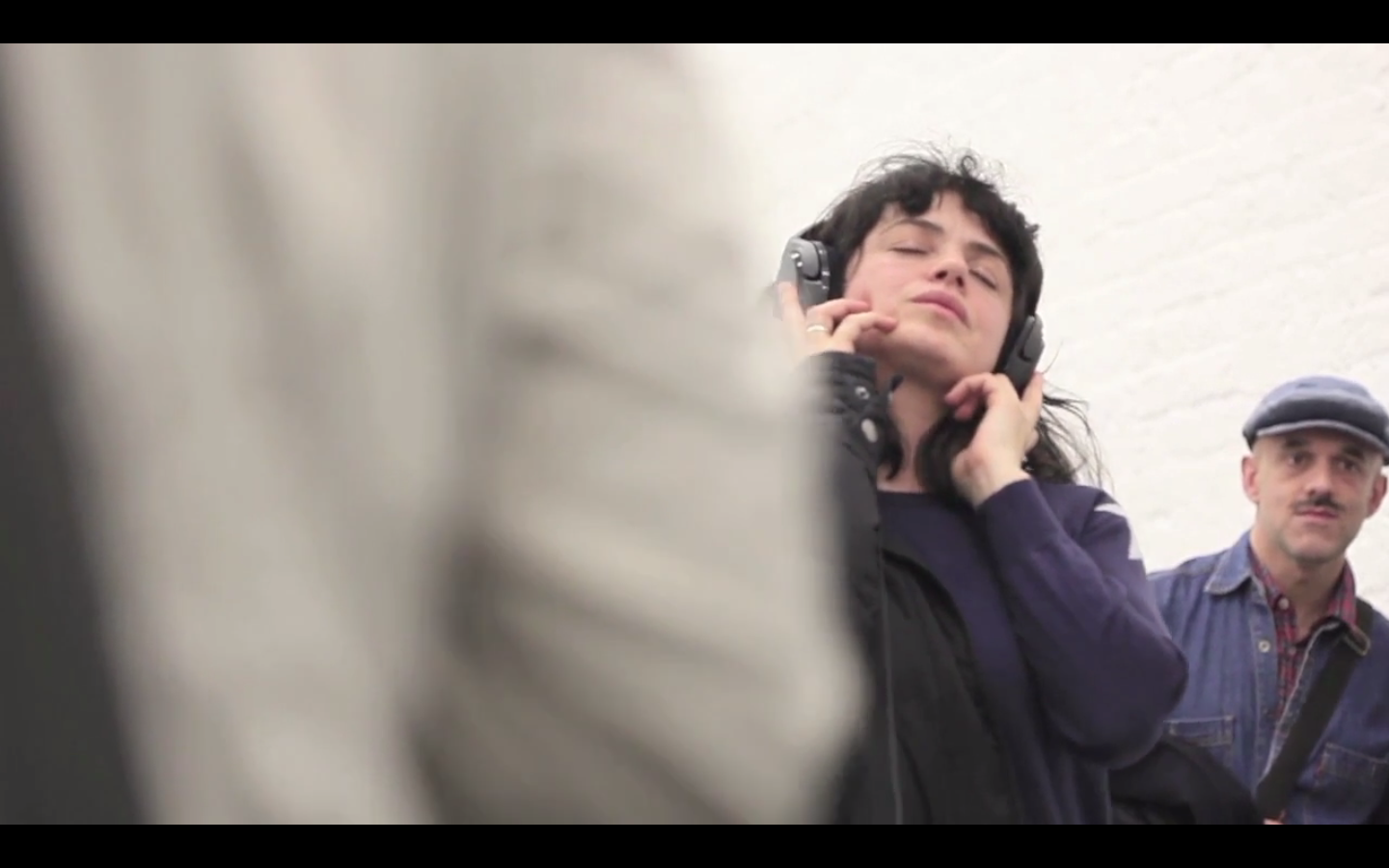 For her performance at David Roberts Art Foundation in 2014 Lapelytė was interested by the history of castrates in Europe, where the Catholic Church would not permit women to sing in choirs. In lieu of this, boys were castrated to prevent their voices breaking at puberty, creating a specific genre of high-pitched voice that was highly appreciated by opera composers. Lina explores the possibilities of reversing this dynamic by instead using females with low pitched voices.

Lina Lapelytė (b. Vilnius, 1984) lives and works in London and Vilnius. She is an artist, composer, musician and performer exploring the phenomena of song. She graduated from the Royal College of Art in 2013 and has been exhibiting and performing internationally, including:

Robertas Narkus (b. Vilnius, 1983) describes his arts practice as the ‘management of chance in an economy of circumstances’. He brings together the ordinary and the absurd to explore notions of uncertainty, chance and symbolic capital through unexpected collaborations.

Narkus has a MFA degree from Sandberg Instituut, Amsterdam and is the founder of the Institute of Pataphysics in Vilnius.